I haven’t posted here in a while, but I’m still doing this. After the Toronto Waterfront 10K, I got back up to speed properly this time: I did two easy 5K runs before reverting back to my standard one-hour run, which I have done twice.

When preparing for my last run yesterday, I realized that there is a ritual involved, as there’s a lot of steps:

I can’t imagine the level of preparation that would be needed for doing more serious distances than 8 to 10K!

So I successfully managed to run the Toronto Waterfront 10K last Saturday. Whee!

For a while there, I wasn’t sure whether I was going to be able to run it. I woke up Friday morning with a cranky muscle in my left leg – ironically, I think it was because I put my feet up for too long on Thursday. Naturally, I spent most of the next day and half worrying about it – I am grateful to my wife for putting up with me during that time! The only consolation I could find was that at least I had run a 10K race once this year already, so it wouldn’t be quite as bad if I washed out this time.

Naturally, on the day, it was okay. I noticed that the muscle in my leg was not 100%, but it wasn’t a muscle I used in running, so everything was fine. Here’s the course that I travelled: 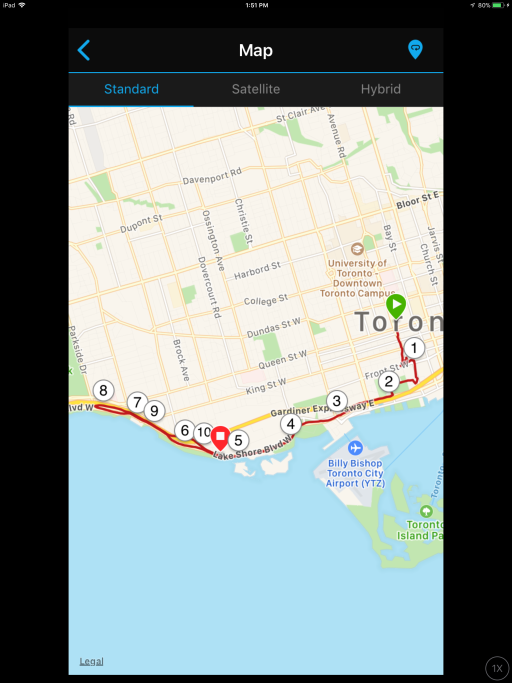 The first kilometre was down York Street into the middle of a whole lot of tall buildings. This messed up the GPS in my watch, so it appeared as if I had run the first kilometre in a little over 5 minutes, which was not true:

What actually happened was that I had run only 0.7 km at that point, but my watch thought it was a full kilometre. This meant that my distances were off from then on: for example, when I reached the 3 km mark, my watch thought I was at 3.3.

I started a little slow, possibly because I was thrown off by the deceptive first kilometre timing. But I eventually sped up a bit. During the last kilometre or so, I went about as fast as I am capable of going (which isn’t that fast). I didn’t turn my watch off right away, so my race time was actually a little better than my watch time:

That was less than a minute slower than my Sporting Life 10K time, and the Sporting Life race was mostly downhill. So I’m happy with this.

Here’s a whole lot more stats about my race – more than you probably need to know, actually: 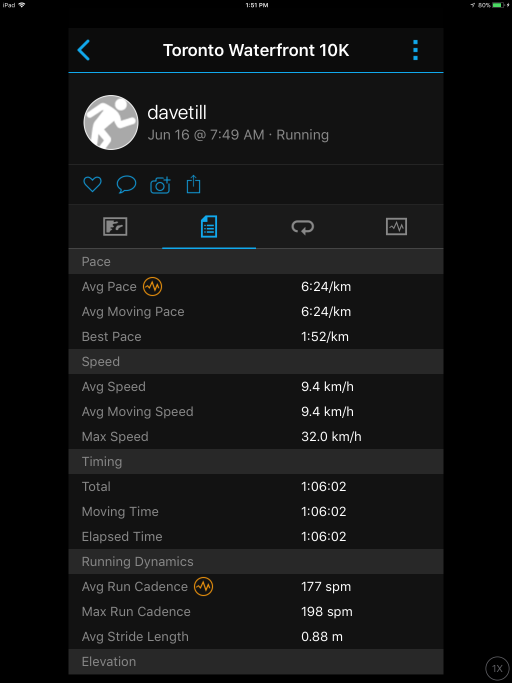 My run cadence (a fancy term for steps per minute) is quite high because I run with short choppy steps, which I later found out is actually reasonably good form. I fell into this style naturally because anything else made my legs too sore. It’s better to be lucky than smart.

And the race organizers provided some free photos, so here’s one of me in action. I am conspicuous because I am tall, not wearing the black race shirt, and carrying two water bottles!

I was pleased that I was able to finish 10K without too much grief (this is partly because I had a gel at the 40 minute mark, so I didn’t run out of energy). I am still a bit stiff and sore, but I plan to do an easy 5K training run tomorrow morning.

I’m not sure of my long-term plans. I think I want to keep my 8K running base – if I can continue to run for an hour at a time at a slow and easy pace, I should be able to enter a race in the fall if I want to. It’s too hot in the summer to run in races, so I have time to decide.

I did my last training run on Tuesday for the Toronto Waterfront 10K. I took it reasonably easy – I went down Mount Pleasant, out the Belt Line to Oriole Parkway, and back. It was 5.1 kilometres in 35:12.

After this race, I need to decide what races I want to do, and what my running plans will be. I’m thinking of regularly running an hour (or about 8K) three times a week, but only entering 5K races. I’m thinking that it might be time for me to spend some time on other fitness-related activities (bicycling, hiking) rather than just running. But I’ll see how this race goes.

So I turned 58 on Friday. Naturally, I took the day off work and went for a run. It was the last longish run before my race on Saturday:

I was going to stop after exactly one hour, but I decided to finish off by going up the hill near where I live. I was happy with the pace.

Today, I started tapering down by doing a 5K run this morning. I’ll do one more on Tuesday and then rest until Saturday.

I wasn’t intending to run at a faster pace today, but I just did. I think I knew that I didn’t need to save as much in reserve, as I wasn’t going as far. I felt a bit dead at the 3K mark, but otherwise all is well. This is the best time of year for running – the weather conditions are ideal, especially if you go early in the morning.

Barring unforeseen calamities, I should be ready for the Toronto Waterfront 10K on June 16th. Of course, something could always go wrong between now and then. At the moment, things are fine, except that I have a bit of a sore hip when I sit in my office chair at work for too long. My temperament is such that I never assume that I am going to be doing something – I always just hope that it will happen, barring something going wrong.