I’ve just started reading Endure by Alex Hutchinson, which is subtitled “Mind, Body, and the Curiously Elastic Limits of Human Performance”. One section talks about the idea that the human brain might force you to slow down before you are in real distress. In some experiments, cyclists seemingly involuntarily started at a slower pace when the temperature was high.

I think I might have just encountered this phenomenon myself. On Monday morning, I couldn’t sleep, so I went out and went for a run early. My pace times were in the 7:30/km range, which is slower than my normal rate: 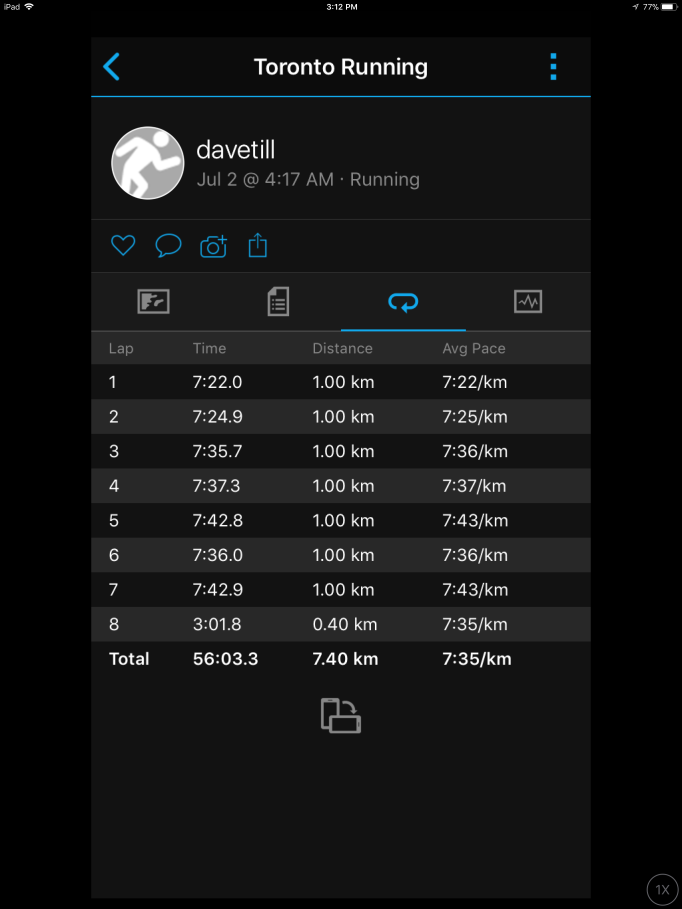 Even though it was before 5 am, it was still 25C, and it was humid. I didn’t feel like I was going more slowly than usual, but I was.

By way of comparison, here was my next run, two days later:

I was basically 30 seconds per kilometre faster the second time out (when it was 23C and less humid).

There are possibly a number of other factors to consider. The first run was very early, and perhaps my brain hadn’t woken up yet. I hadn’t had coffee before the first run, and I did before the second. I tried out my new shoes in the first run (they worked okay). So it could have been anything. But I am thinking that my brain might just have auto-regulated my body to only provide what I could give at that moment.

Which leads to the old saying that, in any run or race, you can only do whatever your best happens to be on that given day. If you have a slow day, it probably isn’t your fault.