A little over two weeks ago, I finally got to run the Zoo Run 5K. This was a personal goal of mine, as last year this was going to be my first race ever, but I broke my toe and had to miss it.

The Zoo Run is a race in which runners travel through parts of the Toronto Zoo: 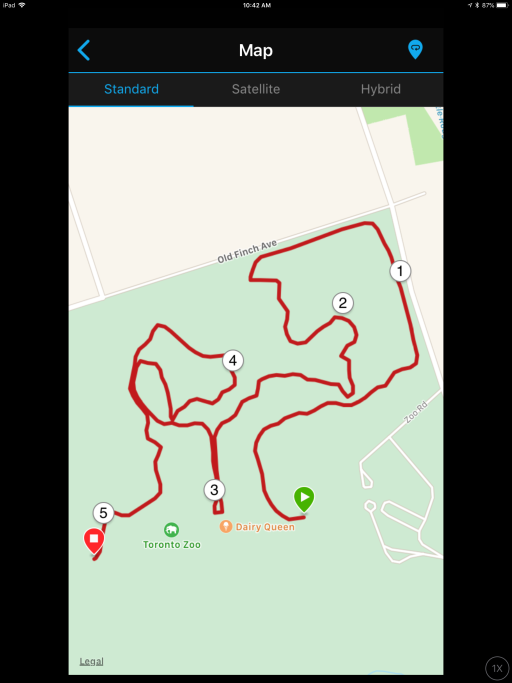 This means that many bemused animals get to watch humans travel by them relatively quickly for a while. (One runner that I saw stopped in mid-race to get pictures of some of the zoo’s inhabitants, which might have affected his race time a bit.)

I wasn’t sure how fast I was going to run, so I wasn’t sure what corral to sign up for. My two previous 5K races were under 32 minutes, so in theory I could have been in the Red Corral (under 32). But that felt like too much pressure, so I put myself in the Yellow Corral (33 to 37 minutes), and positioned myself near the front of the corral for the race. Not right at the very front, since the people at the front were likely to start off too quickly, but close to the front.

The Zoo Run is a bit hilly in places, though not steeply so. Here’s the elevation map for the race, courtesy of my Garmin watch:

As you can see, there were four uphill bits, including a steepish bit near the end.

My plan was to not start too fast, but to pick it up a bit as the race went on, and then finish as strongly as I could. My wife advised me that, if you do it properly, a 5K race is very strenuous. As I understand it, if you’re not tired out and gasping for breath at the finish line, you haven’t left it all on the field!

I think I pretty much achieved this. Here’s the times for each kilometre, again courtesy of my watch:

I started okay (though I was a bit slow in the middle), and then turned it on near the end. The last kilometre was the first time I had ever recorded a kilometre time of less than 6 minutes, which is an achievement for me. (I am not any kind of athlete.) And, recall that this part of the race was uphill:

With less than half a kilometre to go, I was feeling flushed, and by the time I got to the finish, I was worried that I had pushed it too hard and might collapse. I was breathing heavily at the end; if I had a heart problem (which, luckily, I don’t), it would have manifested itself then.

Anyway, it all worked out. I set a personal best for the distance at 31:05 (the difference between the first time and the second time includes the three-minute delay period for my corral):

So maybe I could have been in the Red Corral after all!  I was 11th out of 32 in my category of men between 55 and 59, which I think is pretty good! (Of course, the better runners would likely have done the 10K earlier in the day instead of the 5K, since this would have been a greater challenge. But I choose to ignore this.)

The most stressful part of the race was that there was a long walk back from the finish line to the starting line (a couple of kilometers or so, past a lot of zoo visitors). I had forgotten whether they moved the baggage pickup from the start line to the finish line; if they had, and I hadn’t seen it, I would have had to walk all the way back. Luckily, I didn’t have to.

Anyway, mission accomplished. Next up: I was part of a team that ran a marathon relay in Picton last weekend, and I am going to write that up too.